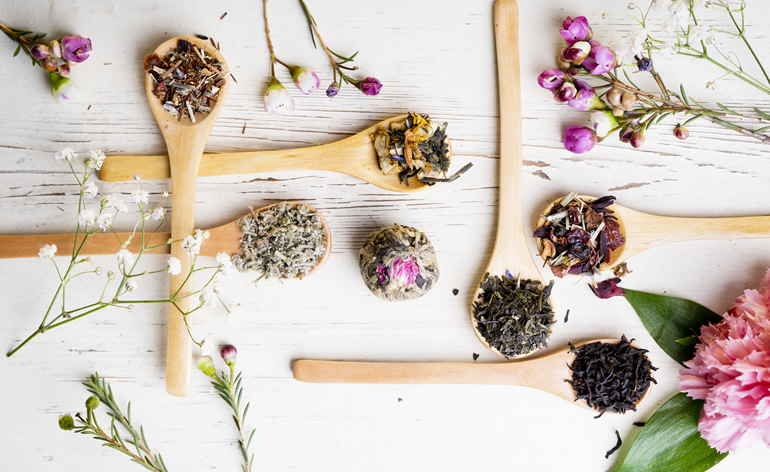 Tea has been used for medicinal purposes for a long time, and as drinkers of tea know, there are different types of tea, each with their own health benefits.

Green Tea is full of antioxidants that have a powerful effect on the body. It has been suggested that green tea with its high concentration of EGCG (Epigallocatechin gallate) can increase the metabolism and help with weight loss, and is also said to help improve cholesterol levels. Other health benefits of green tea are purported to be protection against dementia and Alzheimer’s as well as having cancer prevention benefits.

Black Tea, made with fermented tea leaves, has the highest caffeine concentration. According to some studies, black tea may help to reduce the risk of stroke, and may also help to protect lungs against the damage of cigarette smoke. Pu-erh tea, a type of black tea, is also often used as a weight loss aid. Studies also show that the antioxidants in black also help to prevent plaque, which in turn helps to reduce bad breath, prevent decay and promote good dental hygiene.

White Tea comes from the same Camellia Sinensis plant as green and black tea, but it is the least processed of the three. The leaves are picked early whilst they are still young and the tea is then dried. As the leaves go through minimal processing, white tea contains the highest levels of natural antioxidants. As well as the many health benefits of green and black tea, white tea helps to eliminate free radicals from the body which helps to promote healthy and glowing skin.

Oolong Tea is only slightly fermented and semi-oxidized, which gives it a taste somewhere between black and green tea. As Oolong is a metabolism booster and also helps block fat building enzymes, so can help with weight loss. This tea also helps stabilise blood sugar levels and studies have shown that those with type 2 diabetes could benefit from drinking Oolong tea.

Rooibos Tea (pronounced roy-boss) does not come from the Camellia Sinensis; it comes from the South African Aspalathus linearis bush which is found in the Cedarberg region near cape Town. Rooibos tea is caffeine free and low in tannins so won’t keep you up at night. It can be used to cure headaches, hypertension and stomach cramps. It also aids the respiratory system by increasing airflow to the lungs, which also plays a role in cardiovascular health.

Peppermint Tea is a delicious tasting brew made from peppermint leaves. It helps to improve digestion, cures bad breath and also boosts the immune system. It is also a good stress reliever as it relaxes the muscles, and as it is caffeine free it will aid you in a restful night’s sleep. Peppermint tea has also been found to increase concentration and memory – perfect for anybody studying or working hard.

Camomile Tea is made from an aromatic plant of the daisy family, with white and yellow flowers. Chamomile was used as an ancient medicinal herb to heal wounds. Chamomile tea can also be used to alleviate such things as insomnia, stomach cramps, migraines irritable bowel syndrome, menstrual cramps. It can also be used on allergy rashes by dipping cotton wool into cooled tea and applying to the rash.

Social
« A little bit of history
The history of tea in Britain: Google celebrates the cuppa with a Doodle »